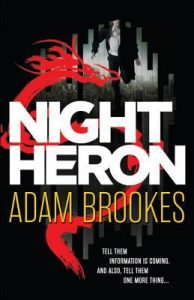 I’ve chose NIGHT HERON by Adam Brookes as my book of the year!

One of the best British spy novels I’ve read.

Action-filled, brilliantly plotted, it had me on the edge of my seat from start to finish. The characters were totally believable, from Peanut, a Chinese spy for the British, to the unwitting journalist Mangan who is drawn into the spy game with devastating consequences. Brooke’s has an enviable eye for detail and is a genius at depicting Bejing’s smog-smothered streets. What lifts the book above the ordinary is the fact that Brooke’s was a former BBC correspondent in China, so every sentence is written with absolute authority and drips with atmosphere. A brilliant debut that deserves every accolade it has received.

You can read my other reviews of 2016 on my Goodreads author page, and my Amazon Author page.