Just flown in from India and beautiful Dharamshala in the foothills of the Himalayas. Mission: to drop a copy of The Snow Thief to the Dalai Lama.

I couldn’t have been more welcome. Whenever I told anyone in town that my book was about Tibet, I got such an incredible response I stopped being embarrassed about taking people’s photographs. 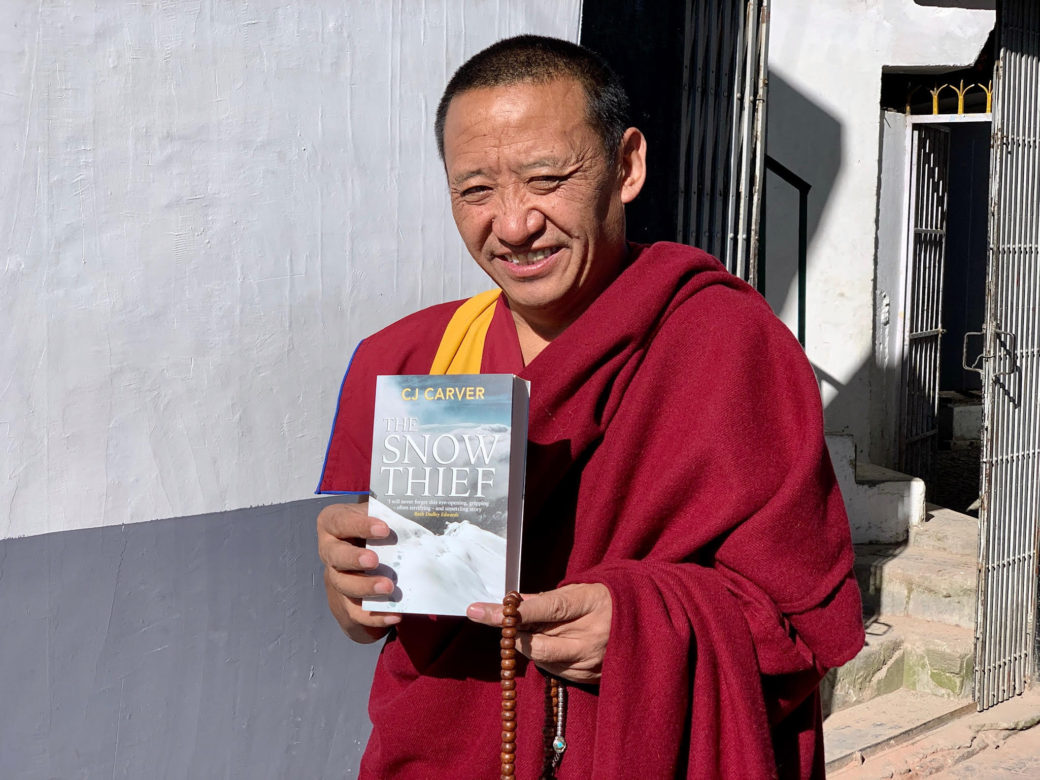 Whenever I told anyone in Dharamshala that my book was about Tibet, I got such an incredible response I stopped being embarrassed about taking people’s photographs. (Image by CJ Carver)

Walking around the hill town I was taken back to my trip to Tibet over twenty years ago. Maroon-robed monks chatting together as they walked, others drinking tea, eating momos – steamed dumplings – with spicy red chilli and garlic dipping sauces. The sound of chanting. Om mani padme hum. Birds singing. Dogs barking.

It made me sad to think the Tibetans here had been driven to flee their own country. Forced to settle away from home, in exile. Would they ever return to Tibet? Could they?

When the sun went down, the temperature plummeted. I was only too glad to be handed a hot water bottle when I went to bed.

Although The Snow Thief is my 14th book, it’s probably the one that means the most to me. Yes, it’s a thriller, but it’s also more than that. It’s about a clash of cultures – between the indigenous Tibetans and the immigrant Chinese – and it’s also about loyalty, and how far people will go for what they believe is right. 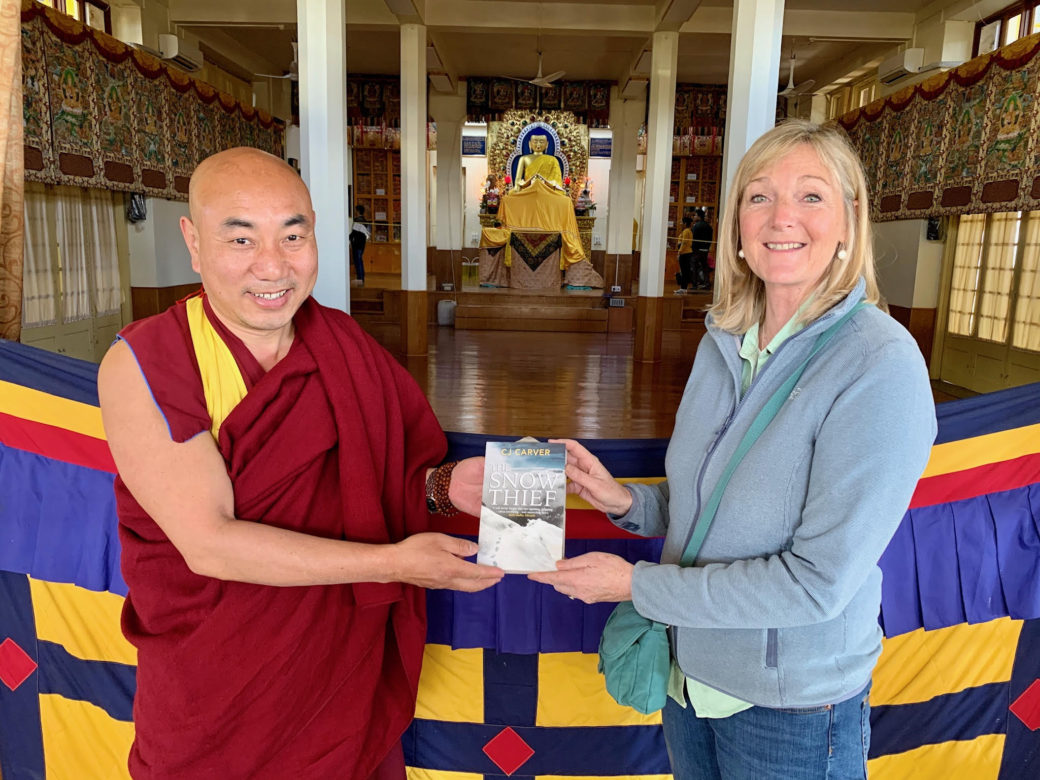 En-route to delivery a copy of the book to HH The Dalai Lama. (Image by CJ Carver)

It’s an adventure story too, but one which I’d like to think has soul. It’s a love story too, which between you and me I didn’t plan, but which grew as I wrote the story, and ends up showing how love can thrive in the most terrible places and between two of the most unlikely people.

Although The Snow Thief is my 14th book, it’s probably the one that means the most to me

At the book launch on Thursday 12 March, I talked about the rocky road to getting The Snow Thief published, so forgive me if you were there, and find I’m repeating what you heard!

The inspiration for this book came three years after my visit to Tibet, when I took a trip to Sikkim, a tiny kingdom in the far northeast of India, bordered by Bhutan, Tibet and Nepal.

I was walking towards a monastery set against a background of snow-capped Himalayas, flowing streams all around, glaciers, alpine meadows, a crystal blue sky. Everything was serene until suddenly dozens of monks began pouring through the monastery gates, wielding heavy wooden truncheon as weapons. They were shouting, their faces puce with rage. 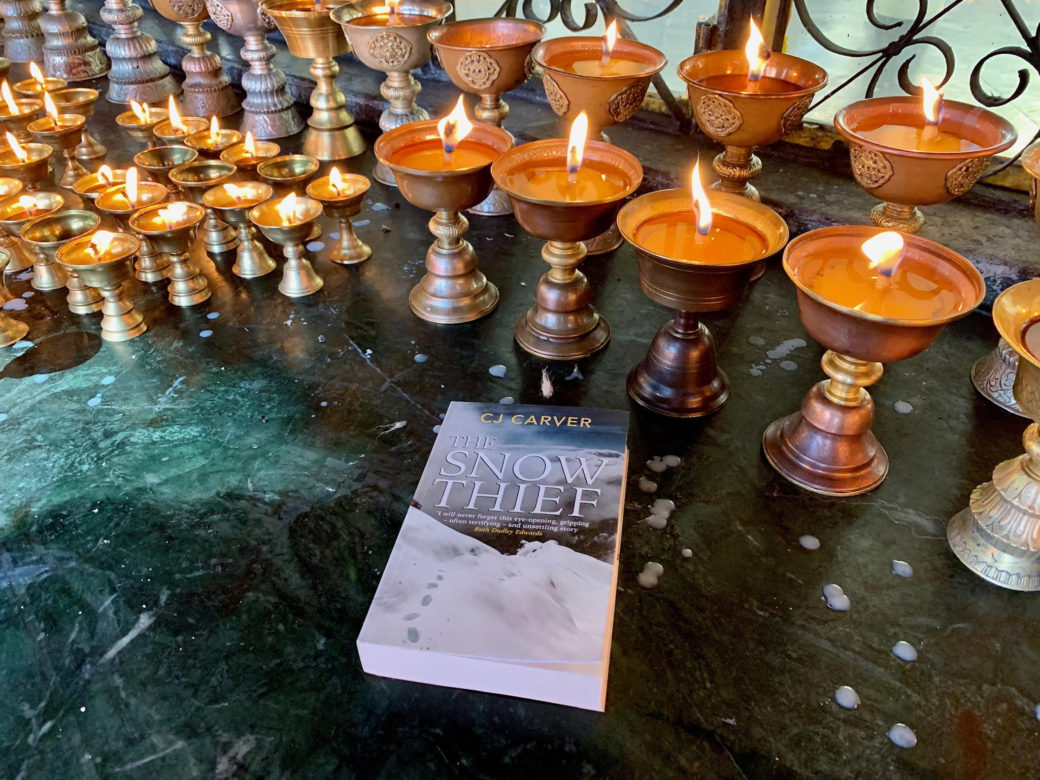 Encouraged by people’s enthusiasm for the book, I photographed it just about everywhere! (Image by CJ Carver)

Shocked, I stopped where I was and watched them tear down the street. A mob of enraged Tibetan Buddhist monks seemingly out for blood.

I’d had no idea monks could be violent (I have to add this was before I knew dob-dobs existed, which are fighting monks). What on earth had got them so angry? It had to have been something incredibly serious and when I found out what it was, how it involved not just monks and monasteries, but the very heart of Tibet, I knew I had to write about it.

Filled with excitement I told my publisher about my new book idea. Their response wasn’t exactly what I had in mind.

“No one wants to hear about China,” they said. “Let alone Tibet. The supermarket buyers won’t even know where it is. It’s not what the market wants.”

Kiboshed, I put my plans for The Snow Thief to one side. I continued to write thrillers. The years passed. But then, without warning, my editor left the company and the publisher dropped me.

Which was a bit of a shock, I have to admit, but once I’d had a bit of thinking (and drinking) time, I realised that even though I had no income from writing any more, I was free to write what I wanted.

And so, I sat down and with a happy creative heart, wrote The Snow Thief. 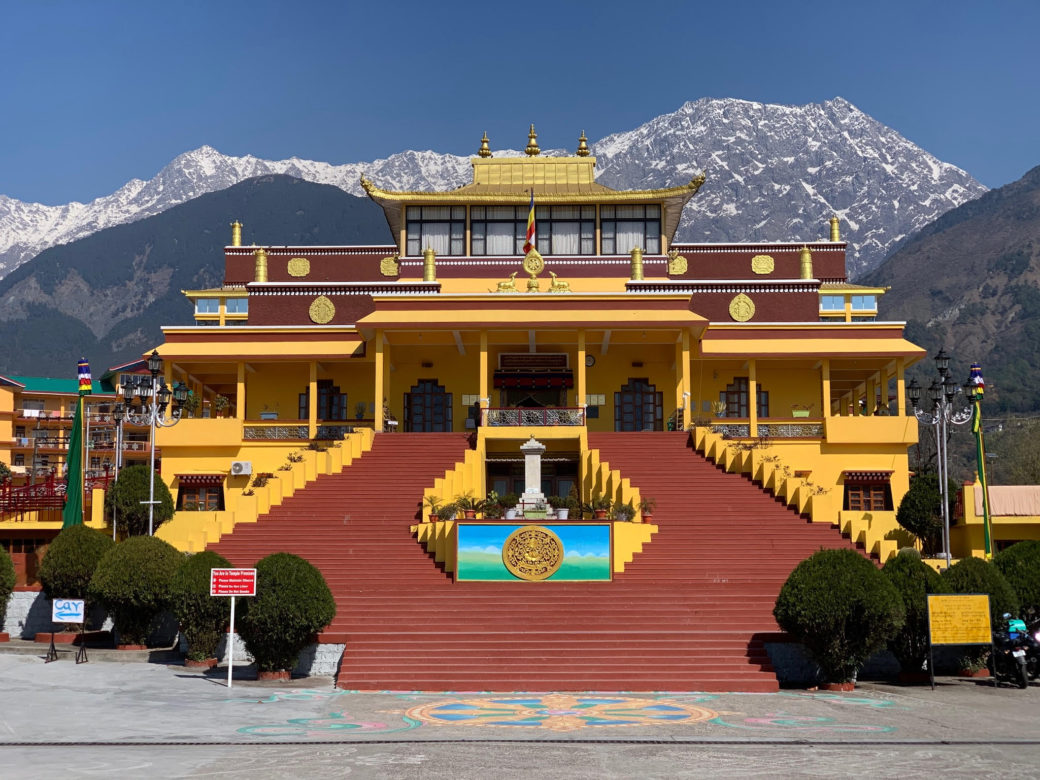 When I finished the book, filled with excitement all over again, I took it to my agent who absolutely loved it. She said it would be my breakthrough book and that she was going to “Go big” with it in the USA. Great! I thought. Fantastic! And then the cultural appropriations storm blew up.

I’d been kiboshed a second time, because not only do I have a Chinese detective in the book (and I’m not Chinese, or a detective) but I also have a high-ranking Buddhist monk (not me) and a Tibetan boy (which I’m certainly not either).

By this time I was tearing my hair with frustration. Argh! How was I going to get this story out?

Trying to think outside the box, I sent the manuscript to the Tibet Relief Fund, who I’ve been a supporter of for years, asking if they had any ideas. To my astonishment, they put me in touch with another supporter who fell in love with the book. He happened to be a publisher.

It was, I realised, Karma. It may have taken over twenty years from inception to publication, but The Snow Thief is now published. Crack open the bubbly, I say!