Well, here I am, back home and back at work. I still feel a bit discombobulated (one of my favourite words) after my trip to NZ and Australia and I’m not sure if it’s the remnants of jet-lag or simply if I’m suffering from a bit of ergasiophobia (another favourite word).

According to Wiktionary, ergasiophobia means having an irrational fear of being able to work properly, especially that of a surgeon being able to operate. Could this apply to an author, I wonder? I’m struggling to get back to work and it’s only now I’m writing this that I realise I’ve been procrastinating like crazy.

I really must STOP posting any more reviews on TripAdvisor, STOP shopping online for endless birthday presents for all my Piscean buddies, STOP taking long country walks and KNUCKLE DOWN.

There, that’s told me.

I’ve managed to write one page of my first outline of book 4 in the Dan Forrester series, and things have already taken a bit of a surprise turn. I was thinking about setting my next book in Australia but now I’m not so sure.

For me, when I’m plotting a book, I need to know three things:

Until I have all three cemented in my mind, my subconscious can’t get to work and start weaving its creative magic. Australia doesn’t quite fit at the moment, and I’m waiting for one of those lightbulb moments when things become clear. Let’s hope it’s soon and then I can stop procrastinating. 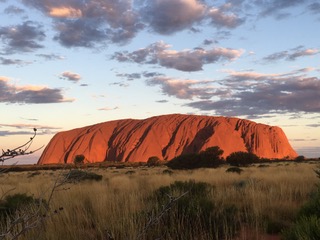 Uluru is one of the most intensely spiritual places I’ve been to. This is my third visit, and I was hoping for some creative inspiration while I was there, but at 40 degrees in the shade, my brain melted. All I could think of was buckets of iced water. And beer.

In case you’re curious, Australia was incredible. It was also wickedly hot at over 40 degrees in the shade, but at least the beer was cold!  The best thing was going for a walk with an Aboriginal park ranger, who taught me how the Aborigines survive in such harsh climes, and how their storytelling and artwork are also maps showing where to find water and game. Lifesavers, literally, if you know how to recognize the landmarks mentioned in the stories and read the dotty artwork of course.

Even in the Western world, stories can save lives. Take German bestseller Frank Schätzing’s The Swarm. He wrote a brilliant scene of an impending Tsunami in his novel which, on Boxing day 2004, was being read by a German tourist on a Sri Lankan beach.

Frank Schätzung’s The Swarm may have saved lives…

The German tourist read Frank’s scene and then studied the beach, the way the water was surging out fast, exposing the seafloor. Instead of joining other people who went to view the phenomenon, the tourist grabbed his family, and ran.

When the 90-foot walls of water crashed into the coastline, he and his family were inland and safe. And all thanks to a “beach read”.

Like Frank, I believe in getting my facts right, so when I say you can stroke a crocodile’s eyes shut with a stick and thus render it motionless, it’s true. Not that I’m sure if this fact will help save your life, but you never know…

Thinking of beach reads, if you fancy something a bit more challenging than your normal who-dunnit or spy thriller then give Hold the Dark by William Giraldi a go.  It’s about a married couple who are bound not just by their relationship but by their home in the cold and merciless Alaskan wilderness.  Billed as a “literary thriller” because of the stunning prose, I admit to slowing right down when I read this book to savour every word and nuance.  Four stars but be warned, it’s pretty violent.

Tell Me A Lie continues to garner some cracking reviews, but I have to admit the one that put a huge smile on my face was from a London cabbie who said:

Now that’s what I call praise!

Lastly but most importantly, I’d like to thank you not just for reviewing my books on Amazon and Goodreads, but for all your Twitter RT’s, FB likes and comments.  I love hearing from you, you keep me going!

Have a fabulous spring (or Autumn if you’re reading this in the Southern Hemisphere) and I hope you get some great books to read.