Well, what a summer!

After what seems to have been the longest winter EVER, we’ve had the longest, hottest summer EVER. For weeks I’ve been feeling like I’m on holiday even if I’m not. This has been disastrous on the productivity front.

I’m not on holiday. But the holiday feeling continues.

END_OF_DOCUMENT_TOKEN_TO_BE_REPLACED

After what seems to have been the longest winter EVER, the sun is finally out, blossom blooming, and the birds are nesting.  The only drawback when the weather cheers up is that I’d rather be outside than in, so sitting at my computer becomes a bit of an effort. Today, for example, I’ve been out all morning, notebook in hand, and as usual when I’m walking, I’ve returned bursting with more ideas for my stand-alone.

END_OF_DOCUMENT_TOKEN_TO_BE_REPLACED

So, the Beast from the East has returned to the UK but luckily, I’m all tucked up in my office with the heating going flat out. I love being snowed in, but must admit that’s only when I don’t have to be going anywhere…

END_OF_DOCUMENT_TOKEN_TO_BE_REPLACED

Well, here we are, well into the New Year and in the middle of my least favourite month. February always seems to drag on forever, but I have to admit that the dull grey days are great for this writer as I don’t have any urge to head outside and play hookey!

END_OF_DOCUMENT_TOKEN_TO_BE_REPLACED

Yippee! The eBook for Know Me Now is now out! And so far the reviews have been great, so I’m really pleased. It’s always a bit of a harrowing time until you get some feedback on a new book, and the relief at all those 4 and 5 star reviews has been massive, believe me.

END_OF_DOCUMENT_TOKEN_TO_BE_REPLACED

Fancy getting ahead of the game? Grabbing a free, pre-publication copy of my new book Know Me Now?

Just go to NetGalley and in return for your free copy all you have to do is give it an honest review.  It doesn’t have to be an essay – I know how busy everyone is – but a line or two and a rating would be fantastic. I’d love to know what you think!

END_OF_DOCUMENT_TOKEN_TO_BE_REPLACED

Where did the month go?! It feels like yesterday that I last blogged but it’s been four weeks! What on earth has been going on?!

My time seems to have been gobbled up by firstly, the copy-edit of Know Me Now, where we try and make sure the story’s continuity is absolutely unassailable along with checking and double-checking that any facts quoted are correct, for example that an old Land Rover’s windows slide open rather than being wound down with a handle.

END_OF_DOCUMENT_TOKEN_TO_BE_REPLACED

I’ve just finished the line edit for my next book, yesssss! A writer’s life is always punctuated by little triumphs, and although I still have the copy edit to come, it’s a relief knowing that there won’t be any big changes and that I can move on and concentrate on the next book.

END_OF_DOCUMENT_TOKEN_TO_BE_REPLACED

Well, here I am, still in that awkward between-books state. Where some people feel they have to write every day, I find having a break does me good – which is why I’m writing this beneath a beach brolly in the garden. I’m on holiday (yippee!) not just physically, but mentally too. END_OF_DOCUMENT_TOKEN_TO_BE_REPLACED

I’m thrilled to find out that my novel Spare Me The Truth, the first in the Dan Forrester series, has been long-listed for the Ngaio Marsh Award for Best Crime Novel!

The award is now in its seventh year and recognises “the best in New Zealand crime fiction”, writes The Spinoff – wow! I’m very honoured to be standing alongside such brilliant talent, particular congratulations to Fiona Sussman and Ben Sanders, fellows at Allen and Unwin NZ.

Longlist entry: Spare Me The Truth by CJ Carver (Bonnier Zaffre): Dan Forrester is struggling to adjust to the gaps in his memory following the death of his son. After a stranger approaches him saying most of what he thinks about his life is a lie, Forrester gets caught up in a conspiracy, alongside a blackmailed woman and a disgraced female cop exiled to the rural backblocks. “It takes all sorts of wild leaps – terrorism, pharmaceutical experimentation – and lands soundly,” ruled ye judges.

The other long-listed books are:

CLICK TO BUY YOUR COPY OF SPARE ME THE TRUTH 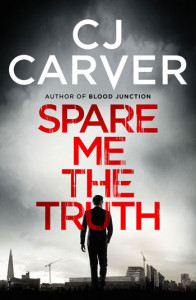 WANT MORE OF DAN FORRESTER? BOOK 2 IS ON SALE NOW! 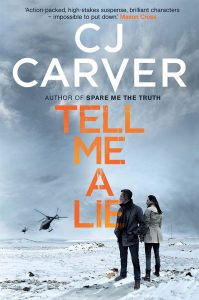