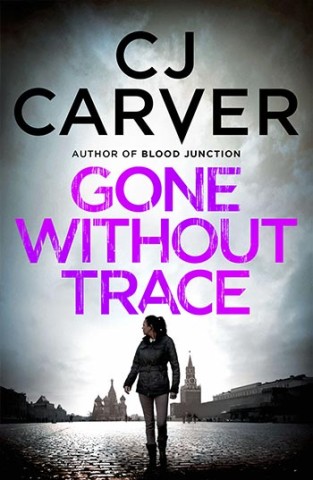 Jay McCaulay receives an unwelcome reminder of her army past when she runs into an old adversary – notorious Mafioso and human trafficker Milot Dumani. When she follows him, events take a sinister turn and she finds herself pursuing Dumani back to his homeland.

But her mission becomes personal with the disappearance of a young Eastern European girl whose life she once saved. Thrown into a world that inspires paranoia, where brutal Mafia thugs give no quarter, and where her family and loved ones are threatened, Jay is forced to confront a trail of murder, corruption and evil that leads back into the heart of the UK…

‘Well-researched, shocking, moving and exciting, Gone Without Trace shows that a British writer can take on the most vigorous of the Americans’

‘The story moves along at a terrific pace. Carver’s best book to date, and as the first four were terrific, it makes this a “must read’

‘A terrific page-turner. Heart-stopping action and a heroine with guile as well as guts’

‘Loved it. Hard, fast and real – a solid gold A-grade thriller with a tremendous story and a great lead character . . . Capt. Jay McCaulay is going to be one of the best’

‘This was a book I picked up with a certain amount of trepidation. After all, the subject matter is deeply unpleasant. It encompasses human trafficking, rape, prostitution, and of course murder. In the hands of some writers, this would become merely an excuse for gratuitous violence, with kinky details being thrown at the reader – but CJ Carver is a professional writer who is reaching her own level and setting the bar for many aspiring thriller writers. The book is excellently well-paced, with believable and sympathetic characters. CJ Carver has created a vivid lead character and credible plot. Apparently Jay will become an identifiable character in a new series of books. Well, this hoary old author is looking forward to the next in the series. A highly recommended read’

‘A realistic, pacy thriller tackling relevant human issues that are testing the political and military mindsets across emerging European States. Set against the post-NATO stabilisation of SW Europe, CJ Carver creates powerful images of human trafficking, the dark forces behind it, and those characters caught in emotional battles trying to make the difference. A great read!

‘CJ Carver’s fifth novel is unquestionably one of the most thrilling rides any reader is likely to experience. Taut, sharp and deeply disturbing at times, here is a novel guaranteed to keep the midnight oils burning through until dawn . . . Not only does CJ know how to entertain and thrill with her writing, she also informs in a way that is never dull or lecturing. All of the events – and circumstances – held within the pages are true and the power of her descriptive prose makes readers want to find out more and to try and prevent the horrifying trade that is human trafficking. This is a truly wonderful read’

‘Jay McCaulay is gutsy, resourceful . . . something like a female James Bond, but none the less likeable for that . . . she is a splendid addition to the gallery of robust Action Women’

‘If you like the kind of hard-hitting, action-packed stories that I do, then I strongly suggest you try CJ Carver. You won’t be disappointed’

CJ chose to set her fifth book in the UK because not only did she want to get to know her home country better, but she wanted to understand organised crime and the huge impact it has on our society. However, it was only when CJ visited Macedonia and Kosovo that she focused her attention on human trafficking.

“I saw an advertising campaign trying to alert young girls that the ads for ice-cream vendors in London during the summer were scams, but the girls I spoke to shrugged, saying it was the government lying to them to keep them at home. I didn’t want to become any kind of campaigner but I felt I had to write about this issue in case even one girl got to hear the truth about what really happens when they come to the land of plenty.”

Jay put her head on one side and looked at them each in turn.

‘Oh dear,’ she said. ‘It looks as though we have a stalemate, because until I know who you are and why you’ve brought me here, conversation is out.’

She gave them another thirty seconds or so and then she picked up a chair and took it to the window. Sitting down, she concentrated on her breathing to try and bring her blood pressure under control. Breathe in and hold, breathe out. And repeat. As she breathed, she came to a decision. For as long as it took, she would sit here in silence and let them fester. She refused to be intimidated.

The minutes ticked past.

Behind her she heard the older man clear his throat. ‘I’m Patrick Kingsman.’

She glanced across at him.

‘I’m with the foreign office.’

He gestured at the sandy-haired man on his left. ‘This is Alistair Ingram. And this –‘ to the woman ‘- is Laura Sharpe. Both are on detachment to the foreign office.’

She’d been kidnapped by spooks.